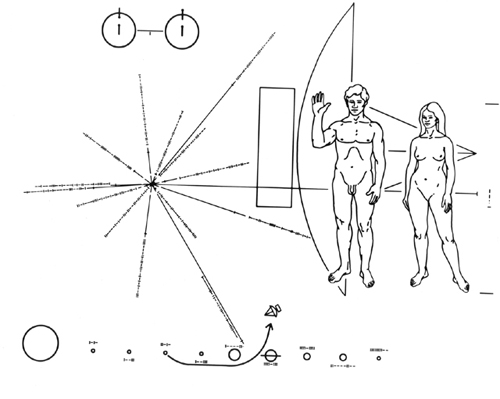 Design is a funny thing sometimes. You never know what ideas will surface in the process of designing, nor what bizarre associations you may make. In the process of working on this site, for instance, I drew a connection to—of all things—the famous plaque affixed to the Pioneer F spacecraft (shown above).

Launched in 1972, Pioneer F (also known as Pioneer 10) was the first spacecraft to venture beyond the solar system into the vast abyss of deep space. The plaque was an attempt to communicate with intelligent life forms who may happen upon it along its infinite journey, and successfully decode its message. In diagrammatic form, it tells the story of the lone spacecraft: where it came from, what its makers look like, and when its journey began. (Similarly, the twin Voyager spacecraft, launched in 1977, carried a gold record etched with images and sound recordings of life on earth.)

Pioneer 10 and its accompanying plaque are remarkable artifacts of a civilization capable of broadcasting itself outside of the confines of its own planet. And yet, how we as a civilization chose to tell our story to other sentient beings in the Cosmos is peculiar, since much of the content in the plaque is deeply encoded, not to mention highly compressed. (Granted, the task of designing complex communications for alien life forms is a formidable one, but couldn’t the scientific messages be a bit more accessible to humans at least? Couldn’t they have hired designers?)

Now that much of the planet is growing familiar and comfortable with the World Wide Web, the capacity for individuals to broadcast themselves outside of their own social and economic confines is profound. The honeymoon has long since worn off for many veterans of the Web, though I am still fascinated by my ability to make my presence known to anyone in the world with internet access. The fact that I can put information out there so easily is seductive, especially given all the framed outlets such as MySpace and Facebook; the knowledge that anyone and everyone can see—and respond to—what I post makes the act of authorship all the more challenging to me. Thankfully, unlike the static Pioneer plaque, I can revise, edit, elaborate on or delete most anything I publish.

While this technologically enhanced freedom of expression exists in the “now” of our cultural consciousness, I wonder what it’s consequences will be and how far they will reach. What effect does all this stuff really have on one another and our civilization? Will all the content on the Web live on long after us? Will it, along with everything else we’ve put on this planet, eventually find an extra-terrestrial audience? What would some yet unknown race of beings think of our blogs and our YouTube movies and our various other creations?

Time will tell, I guess.