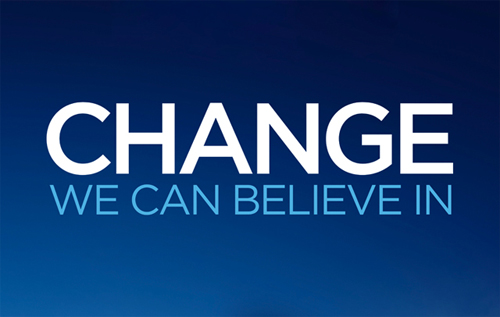 Almost through the first month of 2009, and I still can’t believe we’re in 2009. What’s even harder to believe is the great number and sheer scale of problems we’re facing in 2009:

These are days of high anxiety, for sure. From the consistently jarring news headlines (just search Google News for “worst year ever” 2008-2009) to the unsettling stories of hardship and misfortune that we hear from co-workers, friends and family, or live through ourselves, we may very well be in the midst of one of the most challenging periods in human history.

Yet what I find most fascinating about this rather bleak moment in time is the radical shift in attitude that is taking place in America. The last eight years under the Bush administration were marked with anger and frustration, as the nation’s problems swelled with each passing year (here’s a list of 99 problems), with no real signs of improvement. There wasn’t much reason to be optimistic when faced with a regular barrage of bad news, topped off with the arrogant proclamations of a leader wielding unprecedented power. Of course, not all of the nation’s problems can be attributed to an 8-year presidential term, but there’s no doubt many problems were newly created or woefully exacerbated.

Now, thanks in large part to President Obama’s uplifting campaign, euphoric victory, and moving inauguration (all of which demonstrated huge changes in themselves), a wave of fierce optimism and, yes, hope has swept the nation. Obama has re-instilled confidence in the potential of America — its government and its citizens — to bring positive change, in spite of the enormity and difficulty of problems it faces. The role of every citizen in helping to make an impact figures strongly in Obama’s plan for the nation. This approach signals a distinct shift from the traditional attitude of government towards “the people:” Americans are not merely tax-paying machines that toil endlessly to keep the country fat with prosperity, with little reward save “freedom.” Rather, they are agents of real change and active participants in the success of the nation, supported by a government that has pledged to be more attuned to their needs and more protective of their values. While America is not a democracy in the literal sense (we are a constitutional republic), this administration is restoring the spirit of democracy and faith in its ideals.

The skeptic in me finds this all too good to be true, waiting for those lofty promises to fizzle out or for a gradual regression to business-as-usual in Washington, D.C., but the momentum generated behind Obama seems far greater the man himself. Obama has re-energized the nation, reminding many of their innate capacity to do something important, especially by volunteering locally. Many problems lie too far out of our reach, yet many opportunities exist to better our immediate community or to offer help where it is most welcome.

I will look forward to the changes ahead. They may be slow to arrive, but I’ll remain optimistic while doing what I can to contribute.