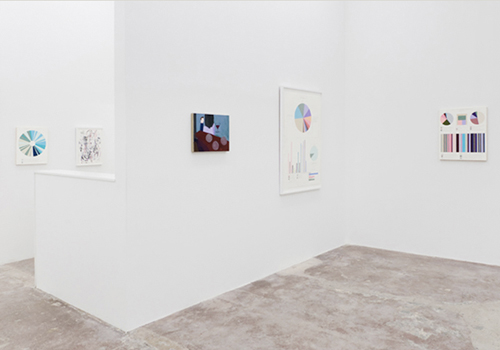 About a year ago, I attended an AIGA panel discussion spotlighting designers who create and work with data displays (I could call them information designers, but that wouldn’t be entirely true). Information design typically gets short shrift in the design community — a tip of the hat at best in annual competitions — so I was quite surprised and encouraged by this event. I was even more surprised to find the venue completely packed.

Part of the answer had to do with who was on stage. John Maeda, the moderator, had attracted plenty of attention at the time with his appointment as head of RISD. He could fill a room on name recognition alone. Two of the panelists were what I’d call hard-core data visualization experts: Steve Duenes of the New York Times Graphics Desk and Fernanda Viegas of Many Eyes. However, the third panelist, Andrew Kuo, seemed to me a bit out of place in this context. He is an artist who visualizes his thoughts and feelings in the form of multi-colored charts and graphs, some of which have been published in the New York Times. While Steve and Fernanda come from the world of objective and accurate representation of facts and quantities, Andrew’s work conversely deals in the subjective and somewhat murky expression of personal emotions. For me this was a jarring combination, as I was looking forward to a serious exchange on professionally relevant issues. The gap between Steve / Fernanda and Andrew was bridged rather poorly, if only by Maeda’s repeated quips to lighten the conversational load and keep the audience entertained. I ended up leaving the event feeling disappointed and, I hate to admit, even less fond of Andrew’s work.

Fast forward to yesterday. I’m walking down 12th Street toward 3rd Avenue when, out of the blue, my eye catches a pie chart hanging on a wall inside a gallery. I take a closer look and immediately recognize the style as Andrew Kuo’s. The execution was unexpected: acrylic paint and carbon transfer lettering on paper, instead of digital output of an Adobe Illustrator graphic. Other works including intricate cut paper pieces, figurative and abstract paintings, and sculptural data displays were interspersed throughout the space.

Overall, seeing the exhibit gave Andrew’s work new meaning for me. While I was initially turned off by the apparent inanity of his charts and graphs, I realized that there was more to it than some attempt at pseudo info design. He’s using that language to tell a story and to try to make sense of everything floating around in his mind. Sometimes it’s funny, other times it’s sad, but it’s all honest. And as I thought about my own work, I couldn’t bring myself to draw comparisons or make judgements one way or the other. This type of work is simply different by nature of what it is, not measurable by any presumed info design standards.

So I encourage everyone out there to go check out the exhibit if you’re in the NYC area. It runs through May 16 at Taxter & Spengemann, and it’s called “I’m Dyin Over Here!”