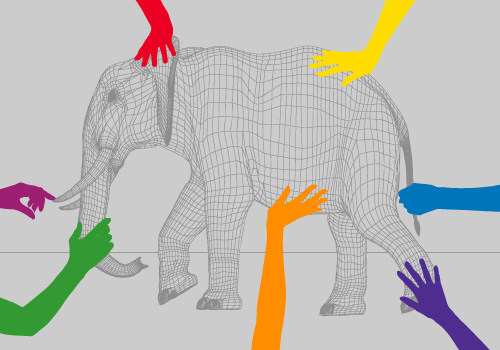 If the word “infographic” is starting to cause heart palpitations and uncontrollable urges to click associated links, then the term “data visualization” or anything plus “viz” is guaranteed to pack the house at events covering the subject. This bottomless appetite isn’t all about empty calories, however. There is growing interest in the rationale behind visualization and a curiosity to hear professionals reveal the “secrets” of their trade. Yesterday evening’s hybrid talk/panel discussion at the New York Public Library, enticingly titled “What Makes Good Data Visualization?”, certainly tapped into the current info/dataviz trend; Isabel Graves, organizer of the event and co-founder of Leaders in Software and Art, mentioned in her introduction that 240 people signed up for only 177 available seats. Compelling data in itself. The lineup of speakers didn’t hurt either: recognized figures in data visualization such as Manuel Lima and Kaiser Fung shared the stage with statisticians Mark Hansen and Andrew Gelman, creative director/multimedia artist Tahir Hemphill, and journalist/computer scientist Jonathan Stray, who moderated the discussion.

Before giving my overview this particular talk, some personal context is necessary. For years, I’ve made it a habit to go to as many information design and data visualization happenings as possible in the NYC area. I’ve put together a mini chronology of events I have attended (some more notable than others):

Time after time, I sign up for these events with the same high expectation: maybe they’ll break through the surface of show-and-tell self-promotion and finally, finally dig into the real issues of information design (yes, I use the term broadly). One can’t expect truly deep, engaged dialogue to happen in the space of 1-1.5 hours at the end of a work day, but there should at least be an effort to unpack and clarify the difficult work of data analysis and visualization, or simply acknowledge that there is a bigger picture to define. More often than not, however, I walk away disappointed at repeated servings of appetizer-like slideshows and tepid Q&A. These events present only one tightly-framed glimpse into a larger realm: generally speaking, designers tend to speak from a design perspective, programmers from a technology perspective, journalists from an infographics perspective, and so on. Nevertheless, I always remain hopeful that the next talk will broaden the view, or that I’ll be bold enough to raise the more pressing questions myself at the very end.

Much to my delight, yesterday’s event broke the mold. For once, professionals from diverse backgrounds were brought together to actually discuss each other’s points of view and address real questions about data visualization. Some of those questions were even baked into the agenda:

I appreciated that there was a deliberate decision to scale back the usual canned presentations and allow more dialogue to take place around the above questions. For their part, each speaker was forced to distill their points as concisely as possible in uniformly formatted slides, which helped keep the audience attentive and attuned to the juxtaposition of viewpoints. During discussion, each speaker was given the opportunity to comment, so that no perspective would be left out. When the inevitable question of utility versus aesthetics came up, a mild debate ensued between Kaiser Fung and Manuel Lima. Each presented a well-reasoned case in support of their position (I tended to side with Fung’s advocacy of a more sparse aesthetic to invite attention and investigation, rather than Lima’s defense of visual appeal as a cognitive hook for attention). It was also great to hear Mark Hansen speak to both the analytical and artistic sides with equal enthusiasm; his comments on enforcing data checking and standards for training data visualization professionals were most welcome. An interesting moment occurred towards the end of the discussion when Tahir Hemphill made reference to a photo of data art sculpture by Marius Watz. When Kaiser Fung asked “What is that?” (or more likely, what data set it was meant to represent), Tahir replied bluntly “It’s art!” to jolt the “numbers guy” out of his frame of reference. Everyone seemed to get a kick out of that.

I had hoped that there would be more time spent on the question of formalizing the discipline of data visualization, but breadth won out over depth, and time was short. The point of the event, I think, was really to show that the exploration and untangling of these issues is a work in progress — an imperfect and slow one that has taken considerable effort to get this far. As long as fuzziness and ambiguity exist within the realm of information design and across data-focused disciplines, more forums for discussion and knowledge exchange are needed to build shared understanding. Designers alone will not achieve this, nor will just programmers or statisticians or academics: the effort must be cross-disciplinary. Otherwise, the elusive viz-elephant representing the massive information design & visualization space will remain a fragmented creature, never to be seen by the public or professionals alike for what it really is.

(For those who may be interested, full video of the event is available here.)