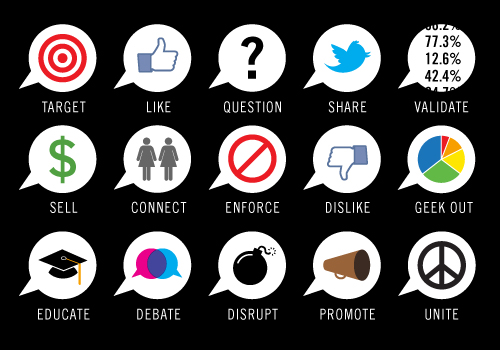 Note: I’ve used “visualization” throughout to remain consistent with the language of both articles, but I feel the term is still ambiguous and tends to refer to data-driven works only.

I spend much of my time sifting through RSS feeds, Google Alerts, e-mails, and tweets in search of those moments of insight that bring meaning and clarity to the visualization conversation. Most of the time I get frustrated or disappointed because, even among the more incisive articles, I keep seeing the same missed opportunities to cut through the clutter and elevate the discussion above debate. However, one recent exchange stood out for me.

Andy Kirk’s article for O’Reilly Radar, Walking the tightrope of visualization criticism, and Robert Kosara’s response, A Criticism of Visualization Criticism Criticism, draw attention to a broad though often unexamined issue: the dynamics of participation in visualization discourse. Andy justly states that criticism of visualizations is often leveled too harshly or without regard for the context in which visual displays are made. By ruthlessly picking apart “unprofessional” works and applying the same rigid evaluation criteria across disparate visualization types, “experts” and others are breeding a culture of exclusivity that discourages newcomers from participating. He also calls for a greater awareness of the visualization ecosystem — the professionals, amateurs, and the general public who occupy this space (to paraphrase Andy’s descriptions) and their respective roles and needs. Even if certain approaches appeal more to the heart or the eye and offend the purist’s sensibilities, their place must still be acknowledged alongside other types of visual displays. Empathy, he concludes, is the key to building a richer, more inclusive community for all participants.

While Andy advocates for the velvet glove in criticism, Robert defends the iron fist. Direct, pointed critique is essential to shaping this still young field, according to Robert, since it maintains the boundary between what is acceptable as visualization and what is not. If we do not uphold the rules and principles of good visualization, as Robert asserts, confusion will continue to reign. Understanding what “good” means and how to achieve it comes from the ability to question why something works or doesn’t work, to laud its merits as well as expose its flaws. Unlike Andy’s tone of gentle guidance, drawn from his experiences teaching data visualization, Robert’s is one of tough love, in which hard truths are delivered without sugarcoating or restraint.

Both Andy and Robert raise excellent points, although I couldn’t help but notice the good cop / bad cop tone in how they present their views. Rather than continue the “criticizing criticism” debate, I see an opportunity in their discussion to sketch out the bigger picture of visualization discourse. I’ve listed and briefly unpacked six different dimensions of visualization discourse embedded in both articles. This analysis is highly subjective and a bit over-generalized, but I hope the piece-by-piece breakdown will inform further thinking:

Andy’s visualization ecosystem construct presents three separate groupings of people within the visualization space, but there are further important distinctions to be drawn between academics and practitioners, college-educated versus self-taught visualization designers, veterans versus newcomers, and others. All kinds of people participate in blogs, discussion forums, and events, and while everyone’s background isn’t always explicit, we should be mindful of that diversity. We also need to acknowledge not just who’s in the room, so to speak, but who we are ourselves — our preferences, biases, and beliefs. We can’t escape human nature, but our interactions in the visualization space would benefit from a measure of human awareness.

2. WHAT are we talking about?

Visualization as a broad realm of practice and study still eludes easy, widespread understanding. Its terms are ambiguous, its boundaries are blurry, its sub-disciplines fragmented, and its many tools and techniques overwhelming. While there’s a very general understanding of what “visualization” refers to by way of its outputs, there is yet no clear picture of what it fully entails. Proponents from different practice areas such as data visualization and infographic design attempt to “set the record straight” on basic definitions, yet they inevitably spark debate and reveal the factional divides that perpetuate confusion. I believe this fact will remain the biggest obstacle to progress across all areas of visualization unless we work toward some common ground on which to coexist and develop a shared vocabulary with which to engage in productive discussions.

Everyone in the visualization space has different motivations to participate, whether it’s learning, teaching, peer recognition, self-promotion, or a blend. These individual reasons are inherent in any public dialogue, and may serve to enrich it, but from a big-picture perspective, their confluence can interfere with focused conversation. Some sites may attract a range of intents: marketers selling a company’s expertise, students seeking career guidance, professionals looking for feedback on their work, and ordinary people looking for an entry point into the field of visualization. Granted, it isn’t always easy to find a home for all interests or to moderate fairly, but productive discussion suffers when spaces aren’t maintained for specific purposes. I believe the goal of participation in visualization discourse should be to promote knowledge exchange and enhance understanding for all. In reality, not everyone may share that motivation and may not even care about the larger ecosystem of visualization, but for some, it is the primary reason why platforms for discussion exist.

4. HOW are we talking about visualization?

With so many channels for expression at our disposal, we have as much freedom to say what we want as how we want to say it. Questions of “right” and “wrong” or “good” and “bad” in visualization naturally stir strong opinions and fuel the urge to make them known. Among blog comments and discussion threads, it isn’t hard to find examples along the entire spectrum of online social interaction, from passive “likes” and nods of approval to “trolling” and other forms of aggression. But in the middle band of the spectrum, there is a fine line between constructive criticism and flat-out fault-finding, and that distinction depends on the words we use and the tone in which we deliver our messages. If we first accept and uphold the notion that interpersonal conduct of any sort should be respectful above all, online or offline, then perhaps we might learn how to balance critical analysis and erudition with consideration for perspectives other than our own. In practice, that may be as simple as reflecting on one’s comments and critiques before hitting “submit,” or as hard as swallowing one’s pride and publicly retracting an inappropriate remark.

5. WHERE are we talking?

Different settings are meant for different conversations, but some conversations don’t happen where they should, or happen instead where they shouldn’t. In the wide world of visualization, with so many places to contribute one’s two cents and the smorgasbord of topics often covered in the same place, it seems that discussions materialize wherever the signal strength is greatest and traffic is heaviest. Sometimes the same question or topic might get asked in multiple places but with different answers (general Q&A sites like Quora and Yahoo! Answers come to mind). That’s great for publishers and site owners, but I’m not sure that’s a good thing for newcomers and for visualization discourse in the long run. It results in fragmented information and potentially lost insights when links break or sites fold, but it also makes the visualization space difficult to navigate. I no longer bookmark websites mainly because there are just too many places to keep track of and not enough sites that make sense of the visualization landscape.

6. HOW MUCH are we talking?

We’re doing a lot of talking about visualization these days, perhaps more than ever before. Books, videos, podcasts, magazine articles, conferences, and other content outlets are extending the conversation far and wide. Much of the chatter skews heavily towards tactical matters: tools, technology, techniques, and, of course, criticism. But when it comes to big picture issues, like defining boundaries and mapping of the landscape, both talk and action are in short supply. Indeed, discourse is verbal in nature, but something tangible must come out of it — whether it’s a new direction of study, a change in practice, or even a bridge between the cultures and tribes of visualization. Otherwise, we’re just volleying words back and forth. This issue is one I think about often, since I find myself doing more passive things like reading and commenting than active ones, like engaging with more people in the visualization community and even directly working on the problems I complain about.

I often see visualization referred to as “young,” “new,” or “emerging,” but as a human activity, it is actually quite old; only our attempts to formalize, popularize, and maximize its potential in modern society are recent. In that context, we still have much work to do if we want to establish a solid foundation for visualization to thrive. What we’re seeing today — the tangled friction between personas, content, motives, behaviors, contexts, and activities — is a natural part of any human endeavor, and as such, it requires human cooperation and human understanding to resolve.

To echo a sentiment I heard somewhere, I would really worry if everything was perfect and there was nothing to work towards. Progress means regularly fixing the things that need improvement while proactively seeking out opportunities to innovate and grow. Little by little, the visualization community is making steps forward on different fronts. Andy, Robert, and others are contributing to that progress in their writing and participation. So long as there are voices piercing through the noise and creating change — old voices, new voices, and hopefully wiser voices — the visualization conversation will flourish for a long time.