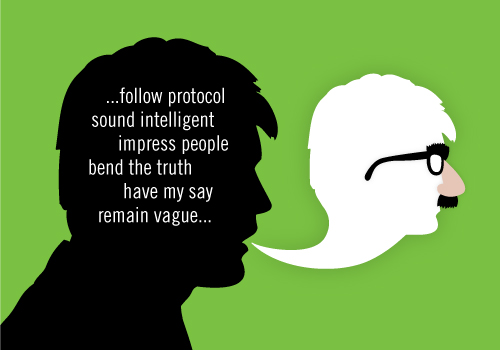 The Oxford English Dictionary, recognized as the “definitive record of the English language,” contains about 600,000 words, but only about 35,000 to 75,000 words make it into the average person’s vocabulary. With such a broad palette at our disposal, it should seem easy for us to assemble just the right combinations of words to capture precisely what’s on our mind and convey it in the best possible way. What poetry we could weave!

Alas, the reality is that we make communication much more complicated than it should be for ourselves and for others. How can we make everyday communication more human?

Generally speaking, schools are capable of doing as much harm as good in teaching communication skills. With the exception of kindergarten story time and the occasional show and tell, communication-related instruction focuses less on cultivating ideas and the ability to express oneself and much more on processing and formatting ideas by way of grammar, punctuation, syntax, etc. Of course, these rules have their value and appropriate place, but focusing too heavily on them is part of the problem we face with clear communication: our preoccupation with what we think we should or shouldn’t do — the split infinitives, the dangling participles, the misplaced modifiers — overshadows our fundamental need to make sense of what we want to express.

You’re Not the Center of the Universe

We all stumble when it comes to saying what we mean and putting it in a way that makes sense to others. Sometimes we give in to mental laziness, spouting off clichés and other well-worn turns of phrase when it’s too hard to construct something meaningful or original. Sometimes we want others to value our thoughts as much as we do, so we primp and preen our language to sound more dignified or scholarly than it actually is. And sometimes, we use words “creatively” to reframe unpleasant or unfavorable realities. What we don’t realize is that in every instance we’re putting ourselves and our interests at the center of communication, not the people we’re talking to. That’s not to suggest our shortcomings with communication are entirely the product of deliberate selfishness. We may have the best intentions but simply act out of habit or convenience. We sometimes don’t realize there is a problem and don’t bother to take the time to think through our message.

When we don’t think from our audience’s perspective, consciously or not, we set ourselves up for failure. This may seem an obvious point, but consider how commonplace “anti-user” behavior is:

We tend to forget that our personal frame of reference isn’t universal, and that not everyone shares our worldview, experience, or knowledge. The disease of familiarity, or being so deeply immersed in a content area that one loses objectivity, can erode a conversation when every other word we use is an acronym, technical term, or insider lingo.

Scenario 2: “This is the way we do things around here…”

In a work environment where we aren’t necessarily speaking and writing for ourselves, we might have to follow a long-held but flawed protocol or parrot the expressions of our coworkers and managers, lest we upset the status quo and jeopardize our employment. To openly advocate plain language would be to pit oneself against internal bureaucracy and the ever-vigilant “Legal,” not to mention risk looking like you actually care about your job and your company.

We may casually gloss over ambiguities and bend the truth with vague expressions because it serves our interests to do so, whether it is to win others’ support or avoid criticism. Euphemisms were borne of this desire to soften the truth by substituting blunt expressions with more subtle ones, like “casualties” instead of “war dead” and “pre-owned” instead of “used.” In matters of public policy, words can spin the same issue different ways: the gun debate comes down to either gun rights or gun control; the abortion debate is a question of being pro-life or pro-choice. These tactics openly disregard an audience’s intelligence. They attempt to “spare” them the trouble of confronting reality, offering instead an effortless line of thought to follow — one that is pre-defined and pre-approved.

The main problem with effective communication isn’t that we don’t know what it looks like or how to do it. It’s that we forget the basic principles or don’t make the effort to practice them regularly. We offload the job of figuring out what we mean to our audience, who have neither the time nor the interest to do so.

It’s time we reclaim that responsibility and re-learn some human-centered fundamentals of communication:

How often do we actually pause to collect our thoughts and review them before firing off an e-mail or having a difficult conversation? Time constraints, highly charged emotions, and other pressures rob us of objectivity and tact, so what we think often leaves our mouths or hands without any filters or censors. Making reflection and review a conscious habit of written and spoken communication can spare the embarrassment and awkwardness that thoughtless words create.

Put an end to conversations that coast along on a thin veneer of agreement, nudged along by false nods and “uh huhs.” Get in the habit of establishing a common language, especially when speaking with those outside your personal or professional tribe. Pausing to spell out an acronym, translate technical concepts into layman’s terms, or just draw an explanatory picture avoids more confusion later on.

Use the right words as they were intended. For instance, nouns and verbs do their jobs fine, so it can get confusing when nouns pretend to be verbs, like workshop (learn and practice), impact (affect), author (write), and incent (motivate). Also troublesome are adjectives that act as nouns and leave ideas hanging, like “legal” and “creative.” They should be followed by words like “team” or “department.”

It’s the year 2013, so no need to cling to officious language and outdated expressions. Steer clear of fluffy fillers like “at this time” (now) or “in the near future” (soon). (“Due to unforeseen circumstances” is just plain silly when you think about it.) Stuffy Latinate words like utilize (use), commence (start), and cognizant (aware) also pretend to be important but fall flat next to their real-world counterparts. If you can say the same thing with simpler and fewer words, go for it.

Acknowledging and delivering the unvarnished truth sometimes means venturing into uncomfortable territory — where doing so could potentially offend another or result in personal disadvantage.  Let your gut be your guide: if reading your own words gives you that gnawing, unpleasant feeling in the pit of your stomach, delete and start over with a clear conscience.

Standing up for clear communication in difficult or unfavorable circumstances is no easy feat, as in situations when someone’s authority or ego might be challenged or when a long-held company policy might be questioned. Bravery in communication means defending clarity and eliminating ambiguity for the sake of a greater good, but doing so with the mindfulness and respect that all the previous points call for. It might also mean setting an example and encouraging others to be better communicators. In either case, the goal is to confidently promote understanding in spite of the perceived risks or consequences.

What are some other guiding principles and real-world lessons for humanizing communication? How else might we enrich our writing and conversations with more signal and less noise?