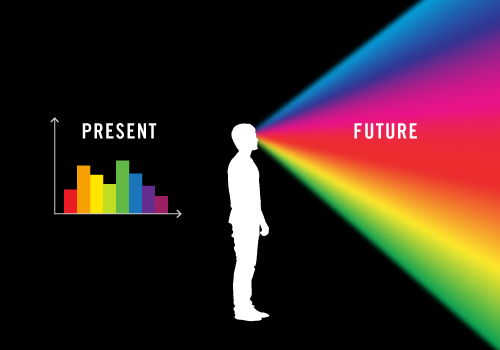 We often think of visualization in the most tangible sense of the word: an image or representation of thoughts, data, observed phenomena — something you can look at. Visualizations conventionally take the form of a print document or on-screen display, but they also occupy environments and increasingly live on devices. Much attention these days is focused on the creation of such visualizations to manage vast data sets and enable sophisticated scientific and mathematical analyses. Visualizations of this type help us understand (and perhaps believe we can control) our environment by giving us insight into the dynamics that measurement reveals — everything from the number and position of near-Earth objects to environmental conditions in New York City. We also use visualizations to understand our own behavior, from our physical fitness to our emotions. The skills needed to create visualizations are becoming more accessible, the tools more sophisticated, and the level of detail sharper and more granular. We keep finding new ways to collect data, new types of data to mine, and new ways to see our present world differently, but we’re losing sight of an innate capability to see and create much more than data could ever allow us to.

The other kind of visualization — one that we all practice but often take for granted — requires no special tools except imagination. It is creative visualization.

Some dismiss it as daydreaming or fantasizing, deriding its practice throughout life, but its every bit as valid and productive a visualization method as it’s more commonly accepted counterparts. Creative visualization is all about letting the mind roam free to explore whatever drifts in and out of conscious thought. It is the doorway to new ideas and new possibilities. It is a breeding ground for the absurd, the impractical, and the completely impossible, but it is also a necessary complement to the more structured forms of visualization.

Aside from giving the brain an outlet for bizarre flights of fancy, creative visualization serves a number of purposes. Brainstorming, or ideation, is probably the most familiar practical form of creative visualization, as it focuses the imagination on a specific task or problem to be solved in order to generate many different solutions or possibilities (of course, brainstorming can be verbal as well as visual). Generally speaking, most brainstorming tends to hover around what is pragmatic and easy to execute; even when the activity is at its most fluid, the fundamental encouragement of wild ideas and transformation of ordinary ideas into extraordinary ones (per Alex Osborn’s original intent) tends to go unheeded. For those seeking to “innovate,” the generation of fresh and original thought often gets stifled by premature criteria: cost, time to market, degree of impact, etc. The full potential of visualization as an innovation tool is often lost because “how you get there” overshadows any open exploration of what “there” could even look like.

In the realm of strategy consulting, visioning exercises are a powerful enabler of change for teams, organizations, communities, and society. A step beyond brainstorming specific tactical solutions, they involve understanding a present reality fully and deeply, perhaps through research and data analysis, in order to envision an ideal future where strategic challenges and opportunities of the present are resolved. Such “visions” might include expanding into new markets, launching new products, reorganizing departments, or re-establishing an organizational vision and entire strategic direction. This activity calls upon different stakeholders to collectively build the reality they want to achieve together (and define their time horizon) by building upon and enriching each other’s ideas. Ideally, such future visioning involves a clear vision or over-arching purpose, uninhibited idea flow, diverse sources of input, and skilled visual facilitation to orchestrate, synthesize and refine the group’s thoughts into a clear and actionable picture of tomorrow.

There is yet another kind of creative visualization that gets very little attention, and perhaps draws the most skepticism: the ability to vividly construct an image or entire experience in the mind and have it manifest in reality.

Closely tied to the New Thought movement of the late 19th and early 20th century, and later re-emerging in the New Age phenomenon of the 1960’s–1980’s, creative visualization of this type relies on the full power of the imagination to effectively “create” personal change by tapping into a force beyond rational understanding or present scientific knowledge. The law of attraction, a core principle of New Thought stating that positive thinking attracts positive outcomes (and negative attracts negative), works in tandem with creative visualization: the stronger the image, the associated feelings, and the intent, the greater likelihood that it will come to be. Some who have written and spoken on the subject, like Neville Goddard, Wallace Wattles, and James Lynn Page, refer to the unseen mechanism of manifestation as a spiritual or cosmic energy (often associated with God), while others like Adelaide Bry, author of Visualization: Directing the Movies of Your Mind suggest the force is within the individual — a largely mysterious but consistently reproducible “mind over matter” phenomenon. In his book Thinking Visually, visual thinking pioneer Robert McKim briefly explores how to cultivate imagination and enrich foresight to achieve future goals by introducing Maxwell Maltz’s psycho-cybernetics technique. So, for example, if you want a bigger house, you must see and feel the future state vividly in your mind: walk through the front door, see tall ceilings and bright sunlight pouring through the windows, feel content that you are living in the house you want. With repeated practice of this technique, the general principle holds that it will happen in real life — maybe not down to the exact details, but it will happen. As for proof that this method works, individual experience is usually the testing ground. Scientific studies seem scarce save for one involving Russian Olympic athletes (the source is unidentified).

Visualization — making things visual in physical or mental form — applies to numbers, words, ideas, and even hopes and desires. While some forms of visualization focus on understanding the present and are rooted in empirical observation, they’re only half of the visualization story.  The more subjective, and some would say the more compelling side, is about envisioning and creating the future, whether by our own direct efforts, through group collaboration, or by means beyond our total comprehension. There may be more science anchoring conventional visualization methods and more pragmatism to focusing imagination on generating “real” solutions, but we should also be open to the potential of creative visualization in its different forms to help us solve problems and improve our lives.