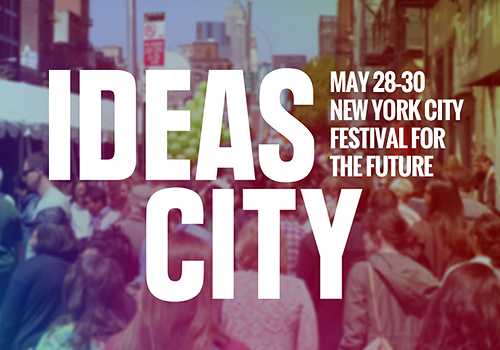 New York is a constantly changing, evolving city. Shops come and go, buildings rise and fall, fashion trends run their course. For years, the city has celebrated its own ability to reinvent itself and yet stay true to its core, the “real” New York — the Frank Sinatra New York and the Jay-Z and Alicia Keys New York. The city is a place of desire and drive, no better captured than in the towering ad-screens and street-level spectacles of Times Square. The same appetites have always come to be fed in NYC — status, beauty, power, importance. It’s just the packaging that has kept changing to suit the tastes of newer generations.

But as years have passed, the values of the city have gradually shifted. There’s more to New York now than just sustaining the wealth that put it on the map in the first place or claiming one’s own piece of the pie. There’s an awareness of something bigger than individual pursuits, deeper than the instant gratifications that city conveniences afford, and longer term than one’s apartment lease. The future of the city is on people’s minds — a cleaner, safer, more efficient, and more inclusive city. A city where people can actually thrive and build communities while preserving their environment and strengthening infrastructure.

Such was the spirit of the inaugural IDEAS CITY festival in 2011 (which then went by the much longer name “Festival of Ideas for the New City”). Back then, optimism was low as many were still struggling through the economic recession. The event provided a much-needed boost of positivity and hope, if only as a show of stubborn resilience against a bleak future, a proud reassertion that NYC arts and culture were here to stay. It certainly got me excited, so much that I wrote about my experience.

Fast forward to 2015, just four years into the future. I’m back at the same event with a shorter name, ready for more good stuff. This time was different though. The bright picture of the future was still there, but what was brought into sharper focus was the stark reality of the present (for more than just NYC dwellers). As stated on the event homepage:

The theme of this year’s IDEAS CITY Festival is The Invisible City, an homage to Italo Calvino’s literary masterpiece of 1972. This theme is rooted in civic action, with each of the Festival’s platforms serving as an invitation to explore questions of transparency and surveillance, citizenship and representation, expression and suppression, participation and dissent, and the enduring quest for visibility in the city.

The full-day conference on Thursday, May 28, zeroed in on each of these topics, as speakers shared their perspective on how they tackled problems within each or proposed solutions. By far, the most galvanizing speaker was Lawrence Lessig, whose dynamic opening keynote on inequality, networks, and democracy shone a spotlight on the broken-ness of American democracy and Internet regulation (find a way to watch it here).

Also eye-opening was the panel discussion Full Disclosure and the Morality of Information. As the panelists openly pointed out, government surveillance of American citizens and personal data collection through various social networks happen every day and have serious consequences, but little is being done, or can be done, to put a complete stop to them. Such unseen activities can be made visible through art projects and awareness campaigns, as the panelists explained, but the real change that is needed must come from individuals taking action to protect themselves.

The Saturday street fair seemed a bit more chaotic / haphazard than the 2o11 version, and maybe a bit emptier than I recall, but that didn’t take much away from the enjoyment. In one booth, a pianist performed his musical interpretation of whatever someone drew or wrote on a piece of paper, no matter how abstract it was. In another booth, the NYC Department of Design and Construction presented the city’s plans for inclusive design for the visually impaired, which included a prototype for a special concrete ramp with raised bumps and ridges plus braille on the railing to indicate a construction site.

What struck me most about the event was the actual absence of the “invisible” people of the city who were mentioned by some of the Thursday panelists: new immigrants, disabled individuals, and others who tend to go unnoticed or flat out ignored by everyday people and public services alike. I think it would have been fitting (necessary!) to not just talk about certain hidden populations receiving help from some group’s efforts but to invite them to participate in the conversation about what their present is like and what they want their future to look like.

As a series, IDEAS CITY has come a long way and is helping to redefine what cities can do to improve the well being of their citizens in the present and in the years to come. Rather than just showcase inspiring and imaginative art, architecture, and technology concepts aimed at a privileged few, IDEAS CITY 2015 dug into real issues that need much more than stylistic innovation to solve.