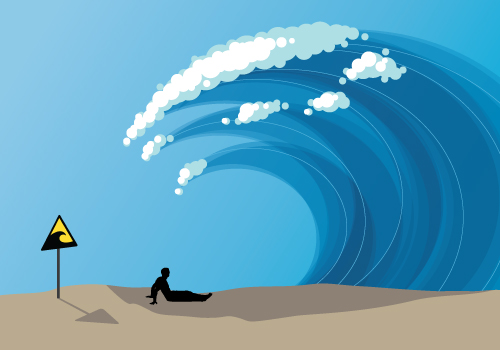 We all struggle with the tension between the way we aspire to be and the way we are. Constructs like the New Year’s resolution only intensify the tug-of-war between the ideal vision of ourselves and the human creature we know ourselves to be (how’s that resolution holding up, by the way?). Often, we resolve to make lifestyle changes that help make us slimmer, healthier, more attractive. But how often do we resolve to make ourselves safer and more resilient amid life’s countless, growing hazards and ever-present risks?

Granted, we can’t all plan for every threat and keep safety top of mind all the time, although many of us do recognize the need to make reasonable provisions for dire situations. But why do some people knowingly adopt self-sabotaging attitudes and behaviors that jeopardize their well being? Why do some people disregard concrete warnings that place them squarely in harm’s way and choose instead to take their chances? Especially in the context of information design, which can be used to speed understanding and instigate action in urgent situations, how do we deal with human irrationality in the face of real danger?

What plays out over and over again, from climate change to car accidents, hurricanes to earthquakes, is Aesop’s fable of the ant and the grasshopper. It’s the one where the grasshopper chose not to heed the warning of the industrious ant who urged him to prepare for winter’s food shortage, only to lay dying of hunger when winter finally came. In an information design context, the ant represents the multitude of efforts by government agencies, public health and safety organizations, and engaged citizens to inform, alert, and prepare the public in the event of a looming threat or sudden emergency. And the grasshopper, well, that’s a sizable portion of the general public.

It’s true that most people do take safety seriously and make some effort to follow the standard guidelines depending on where they live: they install fire alarms and fire extinguishers, stock up on non-perishable food, make a family evacuation plan, prepare “go” bags, and do first aid and CPR training (this should be part of “Human Being 101” education for everyone). And when situations grow more urgent, many people comply with emergency broadcasts and police instructions to relocate or find shelter, rather than suffer the consequences. The broadcasts, guides, and other information that gets out to the public may not always be the clearest or most legible (much of it set in all caps and with plenty of red), but for the most part, they manage to get the job done.

However, there are the Harry Randall Trumans of the world, who stubbornly refuse to take action even when given preliminary warning and mounting evidence that their lives are threatened. Mr. Truman, the 83-year old lodge owner who lived at the foot of Mount Saint Helens, an active volcano in Washington state, made it resoundingly clear that he wasn’t going to leave despite numerous signals that the volcano was awakening (a 4.2 earthquake, steam venting, and a noticeable bulge emerging on the side of the mountain) and the urging of his community. On May 18, 1980, the north face of the volcano exploded, producing molten rock, mud, and ash that reached for miles. Mr. Truman was presumed buried under 150 feet of volcanic debris.

Information designers need to recognize the limitations of the artifacts they create as well as the realities of all the people they design for — the sensible and the irrational — when it comes to safety. The most brilliantly executed piece of information design, whether it’s a data visualization, infographic, warning poster, or instruction manual, means nothing if it doesn’t click with the audience and achieve what it’s supposed to. It must live up to its goal as best it can. Before the content gathering, data analysis, type choice, color palette selection, and all the other usual design tasks happen, there has to be a clear intent behind a message and careful consideration of its delivery: Who needs to know this? What do they care about? Why should they care about this? What do they need to do about it? What could prevent them from taking action? What are the consequences of inaction? Even when it seems all these questions are answered and all available insights are folded into the final design, success isn’t guaranteed. Proof of performance comes from real-life use in the field.

Three examples illustrate the general disconnect between information design artifacts and how people use, or don’t use, them: 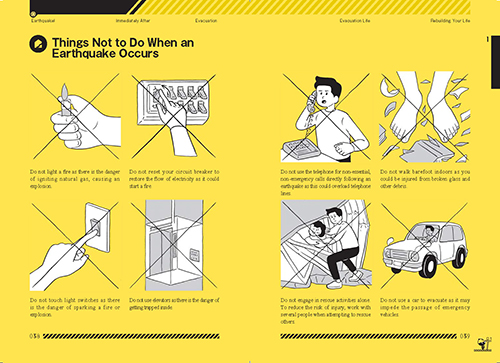 Tokyo is a city prone to earthquakes, floods, nuclear reactor accidents, and other threats. In late 2015, the Disaster Preparedness Tokyo (Tokyo Bousai) guide was distributed to all Tokyo households, along with a map of disaster relief facilities corresponding to the household’s ward. Overall, it ticks many “effective information design” boxes: it’s inviting, easy-to-understand, and comprehensive. There’s even an adorable little rhinoceros mascot named “Bosai,” endearing hand-drawn illustrations, and a manga comic section to liven up pages of otherwise dead-serious content. So what’s the problem? It’s too comprehensive, clocking in at over 300 pages! Sure, it’s all important stuff, but realistically, who would have the patience to sit and take all that in before a disaster, let alone during one? It’s unclear what other efforts exist to complement the guide and reinforce its content, and I’m also not sure how receptive Japanese culture is to detailed manuals (versus American culture), but as a stand-alone piece, it could easily go unread, leaving agencies responsible for disaster relief to pick up the slack with more boots on the ground when trouble strikes. 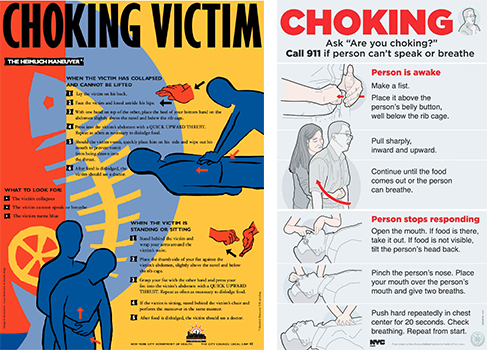 A common sight in most eateries (and a requirement by many health departments), the choking poster is meant to provide at-a-glance instructions for safely removing stuck food from someone’s airway and restoring breathing if they’re unconscious. Variations exist and trendier versions continue to be created, but the bold “CHOKING” title, human figure illustrations depicting abdominal thrusts, and step-by-step instructions are common (both examples above are from the NYC Department of Health, 1997 and 2010?). However, as with the disaster preparedness guide, there is often no time to stop and read the poster when someone is actually choking — one must act immediately — so the format isn’t optimal for the situation. Poster placement also presents a problem. It might blend into the scenery because of its ubiquity and fail to be noticed. It might also contrast with the decor and ambiance of a restaurant or there might not be suitable wall space allowing full visibility to all patrons and staff, so it could easily get hidden in a corner somewhere. (Side note: Movies and TV shows have used the “Heimlich maneuver” as a dramatic or comic device and have, to a large degree, popularized the technique, but even so, it’s hard to tell if the actors in those situations are correctly and safely modeling the procedure for their viewers. And even if one knows how to perform abdominal thrusts the right way, there’s a risk that it might not work.)

One of the most popular examples of information design, the airline safety card is a study in wordless communication across cultural and geographic boundaries. Airplanes may vary in configuration and safety features, but the general instructions for exiting, making emergency landings, and using life preservation equipment are standard on the cards (shown above are panels from the American Airlines Boeing 737-800 Safety Instructions Card, 2012). Despite design and illustration quality improvements over the years, the cards are easy to ignore in the front seat pocket and the potential for misunderstanding still exists, which is why many airlines use live and video demonstrations that interrupt in-flight entertainment to get passengers’ attention and walk through key instructions. Still, given these best efforts, there are people who tune out as soon as they settle into their seat and skip the safety briefing. Whether these people are frequent travelers who can recite the instructions backwards or disaster skeptics who believe “it can’t happen here,” it’s hard to tell, and often, airline crew don’t attempt to make the distinction. (This article from Flight Safety Australia does an excellent job of breaking down passenger safety communication challenges.)

Maximizing the positive human impact of information design requires a proportion shift in how we usually approach information design for safety and emergencies: less focus on information and design, and much more on psychology. Knowing the inter-related mechanics of visual perception, cognition, and design is absolutely essential to presenting information effectively, but this knowledge doesn’t account for how people think, feel, and behave when presented with that information. People make decisions based on attitudes, beliefs, feelings, biases, and a host of other factors. Information designers need to engage their audience with sensitivity and respect in order to uncover those drivers and motivations, especially when it comes to self-preservation. Sometimes, what people share makes rational sense, but occasionally, it defies reason. In both cases, it’s up to information designers to extract the insights that provide clues to the solution.

Poor Mr. Truman may have seemed like a pigheaded old man who foolishly ignored the facts around him. But when you consider more carefully the man and his experiences, the picture becomes a little clearer: He was a war veteran. He was married three times. His wife died three years earlier. He lived 52 years at the lodge he built. He drank often. He was 83. After watching videos about him and hearing him speak about the situation, it became obvious to me that this was a man who was more terrified of surrendering his independence and becoming detached from all that he cared about than losing his own life. He lived his own way in a self-made paradise (turned decrepit museum) and he would be content nowhere else. Period. Of course he was aware of the danger, and deep down he probably knew what his decision would cost him, but it was his decision to make and no one else’s. To have forcefully removed him against his will would have been to end his life right there on the spot.

We need to do our best to unpack the irrational and surface what’s really driving someone’s behavior, whether it’s fear, lack of knowledge, overconfidence, or some past experience that exerts a strong influence on the present. With that understanding, it can become easier to develop human-centered strategies to encourage precaution, such as positive peer pressure from friends and family, normalization and mainstreaming of safety-conscious habits, incentives for taking safety precautions, end-to-end first aid and safety education programs spanning childhood to adulthood, and many others. A holistic, understanding-based approach could transform the topic of safety from something dreadfully tedious or irrelevant to a non-negotiable aspect of everyday life.

We’ll always need help to keep ourselves safe, whether we realize it or not, but we shouldn’t feel intimidated, bullied, or simply put off by the systems we create to ensure safety. Maybe in some distant future, the voice of information design in moments of crisis would be less one of authority and control, and more of empathy and compassion. And we’ll listen, because we’ll know what’s good for us.