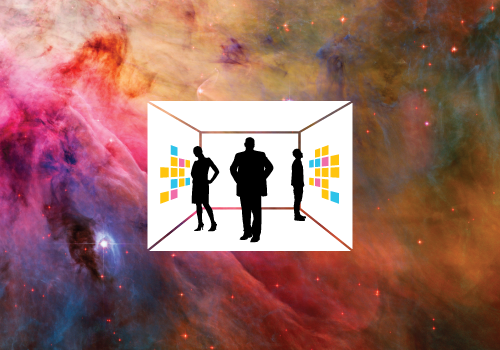 Here’s a fun experiment: think up the wildest possible thing you can. Something unfiltered and completely off-the-wall. Go crazy. Hold that thought in your mind.

Now, how outrageous is that thought? What would someone think of it? We’ll come back to that.

We all have this amazing capacity to imagine. During childhood, imagination burns bright and roams freely. We dream up companions, stories, entire worlds with ease, often transforming ordinary objects and toys into extraordinary things — and we’re encouraged to do that! As we go through school, we’re told to stop daydreaming and channel that imagination into well-defined art and creative writing projects (that is, if our schools cared about those things). We get graded. By the time many of us hit adulthood and start working in traditionally non-creative industries, we get rewarded for making things we’re told to make and making them work better — not so much for making up radically new things. Our imaginations grow dormant, underutilized.

We end up spending more of our time consuming the fruits of other people’s imaginations. Brilliant writers and visual effects specialists transport us to strange new worlds through science fiction movies. Impossibly talented musicians immerse us in thrilling soundscapes. Visionary artists confound and provoke us with works that reinvent reality and challenge conventions. These “creatives” and “artsy types” who fill our world such marvelous creations seem supernaturally gifted, not to mention a bit eccentric and free-wheeling. But if you take away the natural talent, the years of finely-honed skill, and the quirkiness, the key ingredient you’re left with is, in fact, a richly cultivated imagination. And what a precious, highly-sought-after, but misunderstood thing imagination has become.

Imagination, and the people who embody it, have had a hard time getting taken seriously. Historically, novel, “blue sky” thinking has been great for entertainment, escapist fiction, and the occasional “Aha!” moments that spark new inventions. The irony today is that the same systems and organizations that have long marginalized creative thinkers but have celebrated and profited from industrial age values — assembly line efficiency, clockwork precision, and one-size-fits-all standardization — are gradually realizing that what made them successful in the 20th century isn’t cutting it in the 21st, and maybe they need to loosen their ties. Bombarded with economic, social, cultural, and technological change, they’re desperate for “outside the box” thinking to help make them relevant and profitable again. They’re facing a huge imagination deficit and, increasingly, have been turning to those kooky creatives and their strange magic for salvation.

With the gradual rise to fame of creative process-driven powerhouse IDEO (thanks to great press like Nightline’s The Deep Dive), the design-led rebirth of Apple via Steve Jobs, and the repeat box-office hits of Pixar, along with other factors in the late 1990’s and early 2000’s, the business case for imagination was growing strong. However, the actual in-housing and importation of all things design/creativity/innovation has taken about 15 years to take off, with more designers in leadership roles, more “designer” product lines for mass-market retail, more dedicated design/innovation departments, and even the wholesale purchase of design firms by large non-design corporations.

Of course, it’s not enough to buy talent when you depend on your entire organization, from management to the front line, to “deliver on the promise of innovation” (or whatever marketing angle you wish). Training in all manner of design/creativity/innovation methods has become all the rage. Everyone’s getting reacquainted with their imaginations… but primarily to conceive of wondrous new products and services to delight customers, build strong relationships with them, and of course, drive that bottom line.

Companies are making grand investments in the name of creativity, building collaboration spaces, stuffing them with bloopy chairs and tables, painting whiteboard walls, stocking up on post-its, decorating offices with inspirational quotes. It all looks great and maybe gets people excited about sharing their ideas and having them valued, but does pure imagination really roam free in these environments? Is it really okay to “think different” and “encourage wild ideas” or is it just business as usual wrapped in the latest trendy rhetoric?

“Thinking Outside the Box” Without Ever Leaving It

There’s definitely more “harnessing” of creativity — so tightly it can’t get very far — than “unleashing” it in the corporate world. Rather than allow people to stretch their imaginations and see what happens, however nonsensical and illogical the raw output may be, commercial creativity is firmly, cautiously anchored in pragmatic concerns. The enterprise worries about market share, competitive advantage, and profits. Managers worry about hitting their targets and getting the best performance out of their teams. This puts compounded pressure on the teams paradoxically charged with letting loose and being more creative. They’re worried enough about keeping their jobs, pleasing their bosses, getting quick results, and not looking foolish in front of their co-workers if they fire off a few duds. In the end, fear of risk and failure at any level hangs like a dark cloud over all those post-it-filled brainstorming sessions and dry-erase-infused team meetings. You can have any idea you want, it seems, so long as you don’t disrupt the status quo. Inherently safe, viable ideas get shepherded to implementation, while the seeds of potentially great but dangerous earth-shattering ideas barely have a chance to see the light of day. And all that grand talk about game-changing and disruption often amounts to just that — talk.

A recent example of a large organization talking big but really after something small is the IRS. Their IRS Tax Design Challenge flirts with innovation at government scale, but as it turns out, breakthrough ideas aren’t exactly what the IRS wants. According to the description:

Sounds exciting! What a fantastic opportunity to improve people’s interactions with the tax system! And you could get so many wonderful ideas with a public competition. But the very next sentence narrows the challenge — and the possibilities — drastically to a user experience and information design optimization task:

With over 200 data fields at play, how might we design, organize, and present tax information in a way that makes it easier for taxpayers to manage their taxpayer responsibilities, and to use their own taxpayer data to make informed and effective decisions about their personal finances?

They had me at “reimagine” and totally lost me at “data fields.” This bait-and-switch language sends the message that major league innovation and thinking big is purely aspirational: we need to get people really fired up and motivated to fix all the little things that stand in the way of our “taxpayer experience of the future.” Why don’t they come clean and say they want a better website (which is fine), rather than appeal to people’s imaginations for large-scale ideas they’re not interested in (which is deceptive)? And seriously, would a government entity like the IRS ever publicly welcome reimagining?

Meanwhile, there are some organizations who take imagination seriously enough to use it as a vehicle for dialogue and change, like The Extrapolation Factory. This “imagination-based” studio uses prototyping and even improv acting to play out future scenarios, in order to uncover new ways of thinking about present and future problems and opportunities. One outstanding project of theirs is Pawn Tomorrow, an interactive museum exhibition that used a made-up pawn shop of the future as a backdrop for different “stakeholders” to contribute to a broader discussion about future needs and values. Museum visitors were invited to contribute ideas for “items that don’t exist yet” but are informed by “recent and ongoing research, developing technologies and emerging social issues.” Prototypes of the items, like a robotic yogurt-delivery drone and a living air purifier that eats hair and dust, served as conversation pieces for futurists to flesh out their stories and monetary values. Finally, the products were sold in an online pawn shop, with the proceeds going to organizations working towards the futures in which those products might exist.

What’s interesting about The Extrapolation Factory’s approach isn’t the imagining that happens within their projects, remarkable as it is, but the meta nature of their work: creating truly imaginative scenarios and activities in which to imagine a multitude of possibilities. They create large conceptual playgrounds bounded by some key themes and populated with fairly ordinary raw materials (paper, electronics, everyday objects) for experimentation and prototyping. What’s even more interesting, the focal point for imagination isn’t some commercial opportunity but a basic human need shaped by the convergence of technological, scientific, social, and economic forces. In this context of future visioning, imagination is a vital, limitless tool; what tomorrow looks like will depend in large part on our facility in how fluently we can articulate it in our minds.

The Dreamers of Dreams

Perhaps no character in pop culture embodies the spirit of unbridled imagination better than Willy Wonka, impeccably portrayed by Gene Wilder in the 1971 film Willy Wonka & the Chocolate Factory, based on the 1964 book Charlie and the Chocolate Factory by Roald Dahl. Throughout the movie, glimpses into Wonka’s life and personality reveal as much complexity and even raw fury (!) as delight and wonder. One short scene, however, beautifully conveys what pure imagination means in a world that still doesn’t know how to embrace it:

With a piercing, paternal gaze into Veruca’s eyes, Wonka delivers this timeless line: “We are the music makers, and we are the dreamers of dreams” (these are not his words, but the opening lines from Ode, a poem by Arthur O’Shaughnessy). The message is clear, and yet, many of us are uncomfortable giving more free rein to our imaginations. We prefer to stifle or silence them, save them for the pages of our notebooks, or indulge them in absent-minded daydreams and fantasies. We can certainly do better to apply imaginative thinking to business, and no doubt we will, but far greater work remains where we need imagination most — in how we can improve our lives, our communities, and our world.

The real power of deeply imaginative ideas is not so much in their “wildness,” but in how they’re molded, shaped, and built one upon the other to synthesize something new (i.e., applied creativity). Among the most important inter-related skills we can develop are our ability to open the door of possibility wide and play, apply judgement to narrow down what’s possible to what’s do-able, act to make things happen, and learn from the results (i.e., creative problem solving). In nearly every wild idea is the potential for something real, and the possibility of something that could be, but we would never know unless we explore those ideas and find the means to bring them to life. Wonka’s fairy tale world wasn’t really all that fanciful because he — like many pioneering entrepreneurs and inventors in recent history — found a way to turn his craziest ideas into actual things, limitations and constraints be damned. He created his own process, built his own machinery, hired highly skilled people (Oompa Loompas!), imposed strict manufacturing quality control measures, and dared to release products that the public might not be ready for. People like Steve Jobs, Richard Branson, and Elon Musk are just a few people who’ve made headlines for their capitalizing on their imaginations, but such benefits aren’t exclusive to a select few “geniuses” and aren’t limited to financial gain. We all can benefit in countless ways from putting our full imaginations to work.

So don’t lose that shocking idea you had at the beginning of this post. Unbelievably mad, surreal, mind-warping ideas are where the action is. Those ideas don’t come from a boss’ permission or from wearing a black turtleneck and thick-framed glasses. They come from who you are right now. They just need to be let out of the box once in a while.