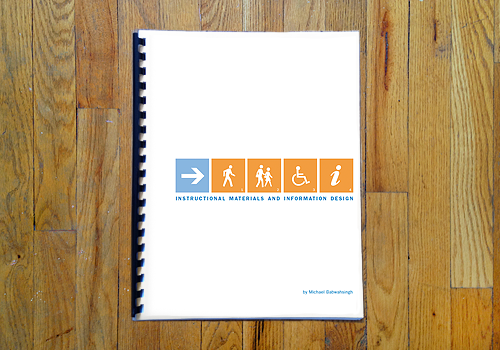 In April of 1999, after about a year and a half of research, writing, and designing, I defended my undergraduate Honors thesis on information design. Eighteen years have passed, and I’m finally sharing it publicly. But my story here isn’t about the content or the details (see the PDF below). It’s about the experience and the lessons learned.

My honors thesis was the official starting point for my journey as an information designer.* While the rigor and depth of an undergraduate thesis doesn’t even remotely compare with that demanded of a real graduate or doctoral thesis, undertaking any sustained study and producing something cogent at the end is no small feat. I just barely survived, was miraculously awarded honors, and graduated with a fancy “summa cum laude,” but to this day I have mixed feelings about that accomplishment. Re-reading those 60 questionably cogent pages is like going back in time, and it makes me cringe. Strangely, I’m grateful for that feeling of uneasiness because it reminds me about the reality of setting and achieving goals, and what “achievement” really means.

How Not to Do a Thesis

Flying high on discovering Edward Tufte, Richard Saul Wurman, and the exciting new field that would become my obsession (thanks to my graphic design professor), I let my enthusiasm, ambition, and naivety get the best of me when I embarked on my thesis. I bit off way more than I could chew by proposing to lay out the theory behind information design, identify key principles for effective information design, and then apply them to three redesigns. I royally mismanaged my time, overcommitting to my two other on-campus jobs and extracurricular activities while neglecting the vital process of writing, revising, and rewriting. I fed my advisor drips and drops of progress, and left my external reviewer (a well-known information designer who shall remain anonymous) in the dark, with barely a full intermediate draft to provide comments on.

Days before my submission deadline, I pulled several consecutive all-nighters fueled by shitty instant coffee to squeeze out the last few bits of writing, slap together my layout in Quark XPress 4, finalize my redesigns in Adobe Illustrator 8, then print something like 6 or 7 copies on a beast of a Tektronix Phaser and manually bind them with a comb binder. In the end, when I dropped off the review copies, I couldn’t tell if what I felt was the delirium of sleep deprivation or the euphoria of actually pulling off such a crazy stunt.

My memory of the thesis defense is a bit blurry, partly because of my still cloudy state of mind post-submission. Information design as a field was unfamiliar territory for most of the reviewers, so the feedback was generally focused on the prose, the arguments, and the graphic design. The reactions that stuck with me most, however, were from my external reviewer, who sent back my thesis scrawled with page after page of sharp, often brutally honest observations and criticisms.

His words stung, no matter how sarcastic or playfully jabbing the tone may have been. In his letter to the Honors committee, he didn’t pull any punches:

There is no doubt that the paper is riddled with faults, errors, and problems. Not the least of these is something that looks to me like a management responsibility: overreaching. The paper suffers frequently from excessive range and breadth at the expense of appropriate depth. Another problem is occasional lapses in focus and sudden, inexplicable jumps of perspective. Related to this are entire sections of pompous, proscriptive lectures, inane recipes (the section on typography is an example), and occasional jargon and psychobabble, all of which suggest the author himself may not know how to separate the important from the unimportant, which is to a large extent a subject of his paper.

The boldface emphasis is mine. That one remark — questioning my ability to judge at a basic level — has lingered in the back of my mind ever since. It manifests as the voice of self-doubt whenever I judge my own work. With time and experience, I’ve learned how to not give that voice too much power, to trust when I really know my stuff, and to seek guidance and input when I clearly don’t.

The paragraph that followed was a little harder swallow, after just getting slammed:

These flaws, as serious as they are, should not, however, detract from the extraordinary ambition of the project. Babwahsingh’s courage in attempting it, the prodigious range and quality of his bibliography, his patently clear understanding of what he read, his ability to synthesize and draw conclusions from his reading reveal an often keen and always committed understanding of the objectives and process of design. All of his lapses and excesses are the result, I believe, of youth, while his successes are the result of intelligence and talent.

It took me a while to process all that. I knew where I went wrong and where I could’ve done better, and I reluctantly acknowledged where I had actually done half-decent work, but my confidence was shaken. I wasn’t sure what this meant for my career. I had an okay portfolio, but this was supposed to be my show-stopper. Would I be proud to show this to a potential employer? What would other professional information designers think of me if they read this? Could I really be excused for those “lapses and excesses” of youth when a job was at stake?

I did indeed get a job at an information design firm, then freelanced, then another job, and so on. I’m now a partner in a company focused on what I love doing — and information design is at the core of it. I don’t know where I would have ended up had I done a better job with that thesis. Right now, those parallel universes don’t matter.

Every perceived shortcoming, every failure, every “lapse” after the thesis and along my career journey has translated to pure motivation to do better, to work harder, to look deeper. I have kept researching information design and am always finding new areas to explore or books to read. There were major blind spots in my literature, but I can’t kick myself for not knowing about them back then. In fact, new ideas and further explorations come to mind when I reread certain chapters. One thing is for sure, though: I’m going to make damn sure I set my expectations appropriately and plan wisely against them if I take on a major writing project like that again!

So, to all those students who are about to start a thesis or large year-long project soon, I offer this advice: make triple sure your scope is realistic, create a plan you can stick to (with ample time for review/revision), and commit to doing your best for the long haul. And to those who are racing to finish their final projects or [insert expletive] theses at this time of year, all I can say is hang on and stay the course — do what it takes to get the job done. And by all means, avoid instant coffee.

Here it is. Enjoy!

* Prior to doing my thesis, I had done a smaller “independent study” the summer after my junior year. I had to design five instruction manuals for the graphic design computer lab (back in the days of PowerMac G3’s, Mac OS 8, LaserWriters, and Zip disks). It was challenging, but not nearly as deep or intensive a research project as the thesis.